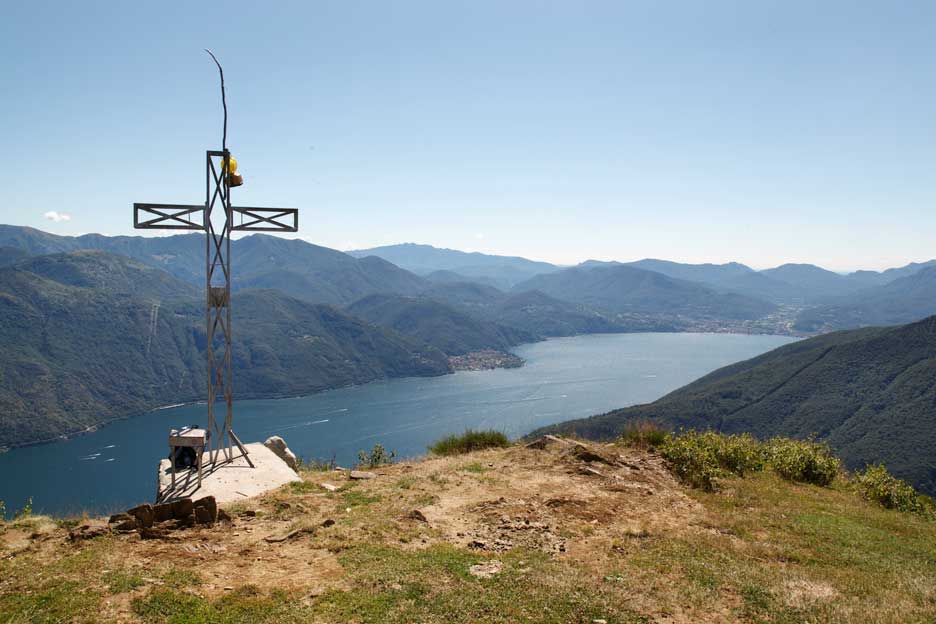 Outside the streets of the old town there is a world to discover, from the beautiful and ancient Cannobina Valley, rich in traditions and culture with more than 250 km of trails that offer the possibility of hiking or mountain biking. A beautiful route called the “Borromea” connects and crosses all the municipalities in the valley, from the medieval village of Carmine Superiore with a wonderful view of the lake, to the small, ancient hamlets of Ronco, Socragno, S. Agata, known as the balcony on the lake, and S. Bartolomeo, from which you can admire a wonderful view of the lake.
A few kilometres from Cannobio, precisely in Traffiume, there is a suggestive landscape that can be admired by following the river, characterised by the erosive action of the waters of the torrents that for millennia have contributed to modelling the rock.
From the so-called balcony on the lake, S.Agata, we find the path that leads to the imposing Mount Giove, a demanding but suggestive path that offers, once reached the top, a wonderful lake view.
The village of Gurro, which dates back to the second century A.D. and is proud of its Scottish origins, is situated in a green valley, characterised by stone houses with stone roofs and narrow streets. With its two museums, the Ethnographic Museum and the Geological Museum, it is well worth a visit.

Camelia 2 Beds
STANDARD WITHOUT BALCONY Romantic double room with a view over the pretty courtyard. Situated on the first floor without lift and balcony. Ideal for adults.

Orchidea 4 Beds
SUITE WITH TERRACE Charming and spacious penthouse on two levels with a beautiful exposed wooden roof and a large terrace. Situated on the third floor without the lift. Ideal for adults.

Tulipano 2 Beds
SUPERIOR DOUBLE ROOM WITH LIVING AREA AND BALCONY Large room with private living room and balcony overlooking the main street of the village. Located on the second floor without lift. Ideal for adults.

Viola 2 Beds
JUNIOR SUITE DUPLEX WITH BALCONY Romantic and quiet room on two levels with balcony. Situated on the second floor without the lift. Ideal for adults.

This website uses cookies to improve your experience while you navigate through the website. Out of these, the cookies that are categorized as necessary are stored on your browser as they are essential for the working of basic functionalities of the website. We also use third-party cookies that help us analyze and understand how you use this website. These cookies will be stored in your browser only with your consent. You also have the option to opt-out of these cookies. But opting out of some of these cookies may affect your browsing experience.
Necessary Always Enabled